The mines and quarries in the area had always had problems in transporting their products outside the immediate area, having to cart their material over land to the River Clwyd at Rhuddlan. The opening of the Chester to Holyhead railway in 1848 and the Vale of Clwyd Railway in 1858 made it a little easier but companies still had to get their goods to Prestatyn for the Holyhead line or to Rhuddlan for the Vale of Clwyd line which ran from Rhyl to Corwen - where it met the Llangollen & Corwen railway.

These new railways in some ways created additional problems because competitors who were then more closely connected to the railways had a distinct selling advantage over companies around Dyserth. In November 1860 a public meeting was held in Prestatyn to consider constructing a railway from the LNWR main line at Prestatyn to Cwm via Dyserth.

Three years later the plans of the privately funded Prestatyn & Cwm Railways & Tramways scheme were laid before the Clerk of the Peace at Mold, in November 1863.

Once the new railway was proposed several local concerns wanted to be included in the plans so various schemes (some quite impracticable) were added to the original route.

The plans proposed a single track railway from a junction with London & North Western Railway at Prestatyn to a point past Graig bach. Here a continuous loop was to sweep round via Cwm, Marian Cwm, Marian Mills and rejoin itself near Graig Bach.

This was to be accomplished by constructing four separate private railways/tramways.

Railway No.1 was relatively straightforward and most of it was actually completed, but it stopped in Dyserth instead of roughly following Pandy Lane, Foel Road and Cwm Road to a point near Cwm Church.

Plans for The Prestatyn and Cwm Railways and Tramways 1863

However, it appears that the planned loop was realised to be over ambitious and too expensive so plans for Railways 2, 3 & 4 were abandoned.

Railway No.1 was originally planned to nearly 4.5 miles long, from Prestatyn to Cwm. The proposals for this section went ahead for a while but would probably also have been abandoned had the LNWR not stepped in. They submitted plans in November 1865 for the LNWR Prestatyn and Cwm Railway. (Although it was only planned to go as far as Dyserth). Approval was granted by parliament for the 2.75 mile long Prestatyn & Dyserth Railway.

Construction started in the summer of 1868 and the line was opened for freight traffic on 1st September 1869. The final cost of construction was £29,878.

Towards the end of the 19th century calls were being made for a passenger service and in 1896 a petition received between 3,000 and 4,000 signatures. 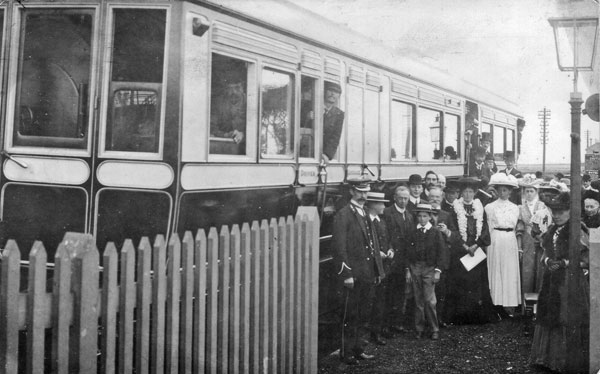 9.5” diameter by 15” stroke horizontal inside cylinders.

Two sets of water tanks with total capacity of 455 gallons. One attached to the engine unit itself, the other to the underframe.

For the passenger service new halts were opened at Prestatyn (main line) station, Meliden Road (Prestatyn), Meliden and Dyserth. Though the halt at Meliden Road bridge was renamed Rhuddlan Road in mid-August 1905 to avoid confusion with Meliden station. Rhuddlan Road was also considered by some to be a misleading name but the name was retained until 1923.

Chapel Street was opened in 1906. The last to be added was at Allt-y-Graig, which opened 12 months before passenger services were withdrawn in 1930.

In the later years of the passenger service Dyserth station had a ticket office (the only one on the branch line), waiting room, toilets and general store - these were all housed in two relocated wooden huts. One of these had come from Connah’s Quay and the other from Dyserth yard.

Apparently one of these huts (that held the ticket office and general store) was dismantled around the 1970s and was being stored in case the line was reopened - I wonder if it went to the Llangollen railway.

The vehicle pictured is a steam-powered Railmotor built in 1905 at Wolverton, with a steam engine from Crewe. The coach was 57 feet long and 9 feet wide with a 4-wheeled bogie and the 4-wheeled coupled engine unit.

I believe this branch line was the first railway to use the new Railmotor and following their success here in they were introduced, in December 1905, between Bedford and Bletchley and on the Oxford to Bicester line.

This photo of Railmotor No.1 was taken on the day of the inaugural passenger service between Prestatyn and Dyserth - Saturday 26th August 1905. 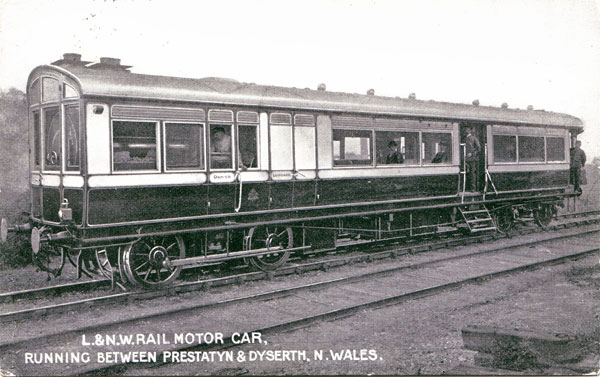 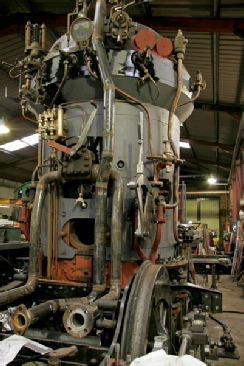 The engine room is at the the left-hand end of the above photo, followed by the Driver’s compartment. The next two doors, without windows, are marked “Luggage” and the the rest of the carriage is made up of two passenger sections (a “smoker” and a “non-smoker”) and another driving position at the right hand end.

Access to both passenger compartments was from the vestibule between them, where there were folding steps which were swung up when not in use. As a safety feature, when the steps were lowered the brakes were automatically applied.

Both passenger sections were quite plush, each with 24 seats which were covered by closely woven rattan and said to be spacious and comfortable. The seat backs could be reversed so that passengers could always face forwards.

The inside was finished in framed teak and the floor was linoleum covered. Interior lighting was electrical from three double brass pendants in each section.

The Railmotor had automatic vacuum brake controls and screw brakes which could be operated from either driving compartment. A speaking tube, similar to those on ships, allowed communication between both driving positions.

By 1920 the Railmotor service to Dyserth had been supplemented by Push/Pull trains, which were more versatile and reliable - though more expensive to operate. By 1922 the Railmotor was no longer used and all trains were Push/Pull - usually one coach and a tank engine.

The propulsion unit from a Railmotor, undergoing restoration at Llangollen Railway in 2010

The opening passenger timetable consisted of 8 trains daily each way, reduced to five in winter, with extra late evening trips on Saturdays. There were no trains on a Sunday.

By summer 1911 there were 16 trains each way daily, reduced to nine in winter.

Eventually the traffic became about 16 or 17 trains daily during the summer and 13 or 14 during the winter, right up to closure in 1930. 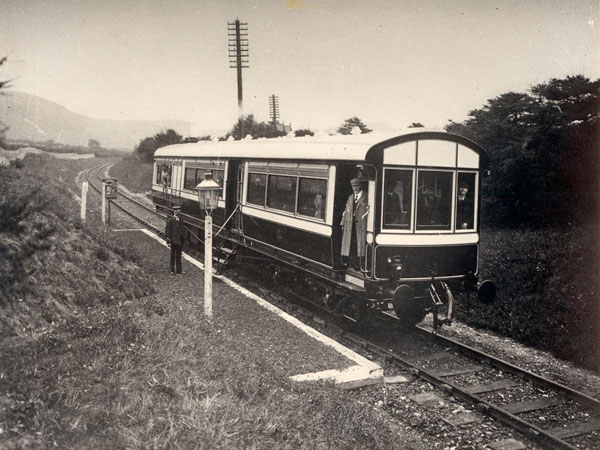 However, the train was so successful that the timetable was often ignored and trains ran back and forth as possible - nearly 30,000 passengers were recorded by the end of the first year of operation. The combined population of Prestatyn, Meliden and Dyserth in 1905 was only about 2,800 people!

By the early 1910s there were two freight trains each way daily. At the peak of freight services in in 1923 there three each way until the Castle quarry closed in 1931, when the number dropped to two. This was constant until 1953, when it was reduced to one - due to more mechanisation within Dyserth quarry which reduced staff there to 34, and to increased delivery by road. Trains remained at one a day until the branch line closed in 1973.

The Flint and Deeside Railway Preservation Society was set up in 1972 and looked a number of railway lines with the aim of preserving one of them. The Prestatyn to Dyserth line was the preferred choice, though still in use at that time for freight. The society bought their first locomotive in April 1973 - a Kitson 0-6-0 saddle tank Austin 1, built in 1934. It had been used at the Austin factory at Longbridge until 1971 and was delivered to the Nant Hall Hotel in Prestatyn where restoration work was planned to be carried out.

By 1974 attention turned to the Ruabon to Barmouth line, particularly the section westward from Llangollen and restoration plans for the Prestatyn-Dyserth were subsequently abandoned.

The Llangollen Railway Society was established in 1977 and the Flint and Deeside Railway Preservation Society was wound up, transferring its assets to the new organisation. More information on www.llangollen-railway.co.uk

Austin 1 was moved to Llangollen, where it was renamed Burtonwood Brewer.

The railway line is now the Dyserth - Prestatyn walkway, below right. 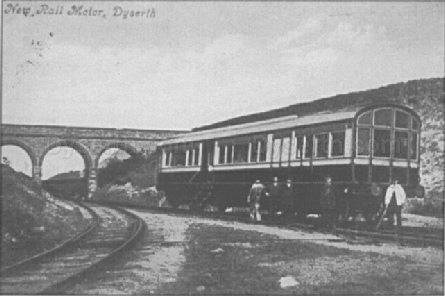 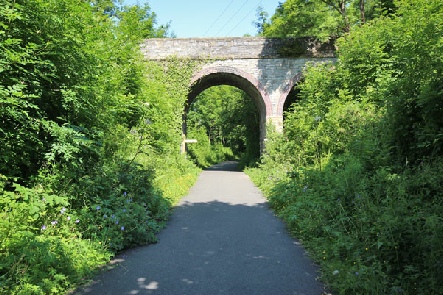 The same bridge, with a hundred years or more between photos

Many more old Railway photos in the the Old Photo Gallery 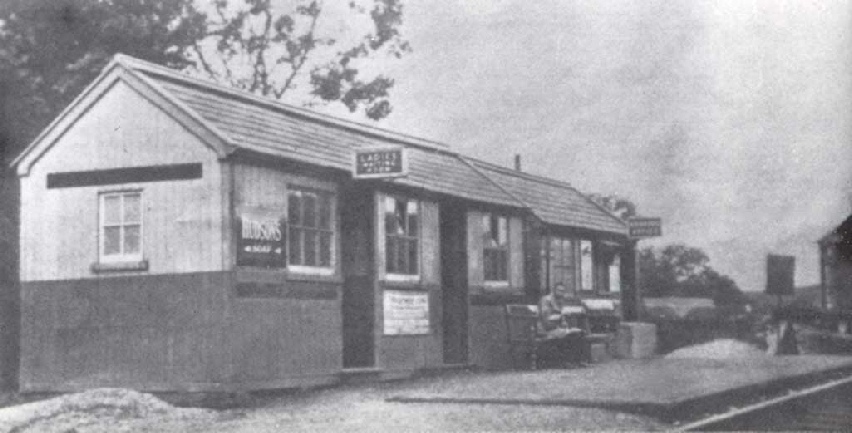 The passenger station at Dyserth