There has been mining and quarrying in Dyserth for centuries. Lead mining was taking place even before the Roman occupation, and quarrying goes as far back as the 13th century at least, when some of the stone would have been used to build the castle.

There were at one time several small quarries along the foot of Moel Hiraddug; the stone from one of them, the Jubilee Quarry, was used to surface the road, Ffordd Glai, which was as its name suggests, a muddy track. It is now Ffordd Ffynnon. As it lay on the boundary between Dyserth and Cwm parishes, Dyserth provided the stone, and Cwm the transport for it.

Before the arrival of the Chester to Holyhead railway in 1848 the stone would have been transported by horse-drawn carriages and then by river from the port at Rhuddlan. A branch line to Dyserth was built in the 1860s for the mine and the quarrying. 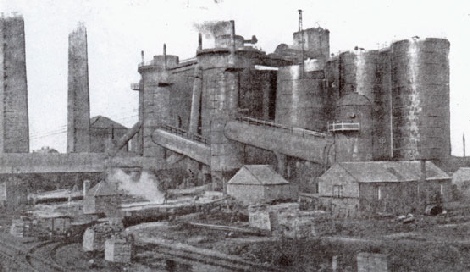 The main quarry, which remained operative until the early 1980s, was, at the beginning of the last century owned by W.L. Hobbs. In the early 1900s this provided employment for 40 men, under the manager, Mr. T Johnson Humphreys. This quarry supplied limestone to Mostyn Ironworks, and lime in various forms was of more than local importance. The London and North Western Railway opened a mineral line from the main Chester-Holyhead line to Dyserth. The problem then was to get the stone from the quarry to the railway. Narrow-gauge rail lines took trucks to and from the quarry on a bridge over the road to the kiln. From there a two-way ramp ran down the slope to a siding. Full trucks going down would pull up the empty ones.

A further obstacle was a bridge over the river which was not strong enough to take the weight of a locomotive. So the engine would bring empty trucks up as far as the bridge, reverse back a certain distance along the line, then get up speed, and give the trucks a good push to send them over. Then it would be the job of a couple of men to catch and stop them. this was not always easy. Too hearty a push sent them too far and one truck at least was known to go over into Pandy lane. Two quarry horses, Prince and Sam, would be used to haul the full trucks back over the bridge to the waiting engine. Dorothy Hobbs, the daughter of the owner, noted for her powerful voice, acted as foreman. 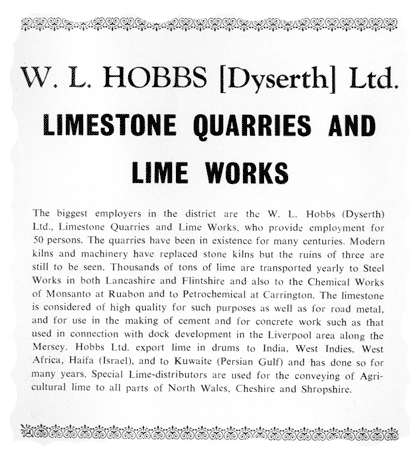 Forty men worked the quarry in the early 1900s, then owned by W.L. Hobbs and managed by Mr T Johnson Humphreys. Hobbs’ house, Greenfield, in Fford Ffynnon still stands. The quarry bell rang time bells at 7.a.m., 9.a.m., 12 noon and 5p.m. On Saturday mornings the quarrymen collected their wages from the quarry office (now the surgery on the corner of Pandy Lane) and the villagers could buy a lump of lime to whitewash their cottages.

From a Dyserth Festival Brochure, 1958 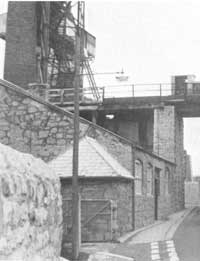 The quarry ceased production in the 1980s. Some Dyserth residents breathed a sigh of relief, for the quarry blasting had sometimes been so strong that rocks would land hundreds of yards away. 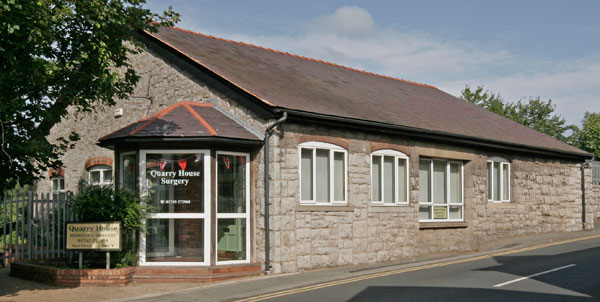 The Quarry Office in 1967, left, and the same building, pictured in 2012, now Quarry House Surgery

On 17th February 1972 Sir Anthony Meyer (MP for Flint, West) said in Parliament:-
“Quarries are a very sore point in Flintshire at present. Last Friday a shattering explosion of the limestone quarry at the village of Dyserth sent huge boulders crashing through roofs and windows in the village. Three schoolchildren were injured in their classroom and a number of cars were totally destroyed. It was a miracle that no one was killed. The people of Dyserth are demanding that no further blasting be allowed at this quarry. It is certainly unthinkable that operations should be resumed there until the most thorough examination, including the most meticulous geological examination of the rock structure, has been most carefully and painstakingly completed. Even then it is, to my mind, most unlikely that the mining company will ever be able to give the people of Dyserth the kind of assurances which will set their minds at rest. Unless it can do so, I ask that all blasting operations at this quarry should cease permanently.”

As well as quarrying there had also been a number of lime kilns, the largest of these, Dyserth Lime Works, used to dominate the village skyline. 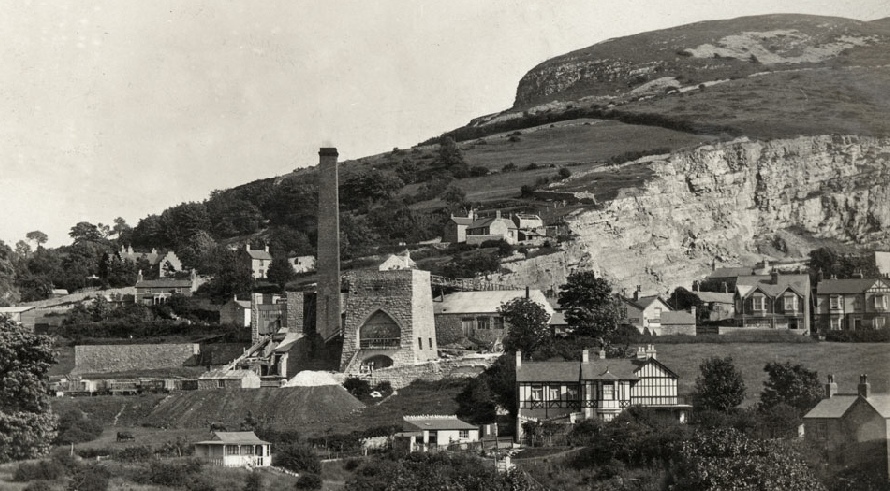 An enlarged section from the above picture - note the railway wagons, bottom left

Some of the kilns on Upper Foel Road, from a postcard posted in 1910

Click below for an account of the incident on Friday 11th February 1972 from Mrs Wenna Williams,
Head of Infants at the time. Recorded in February 2020

The crusher was high up on the eastern side of the lower quarry.

This was fed with boulders from above which were then crushed to to about 7 inches. 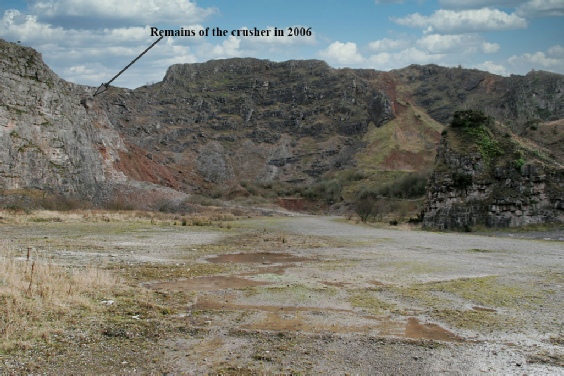 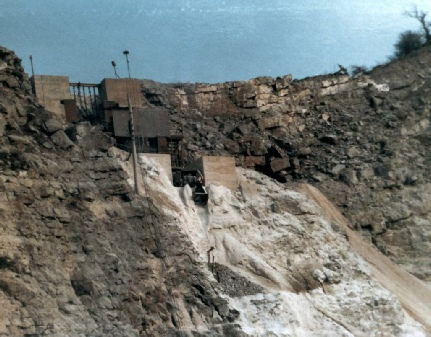 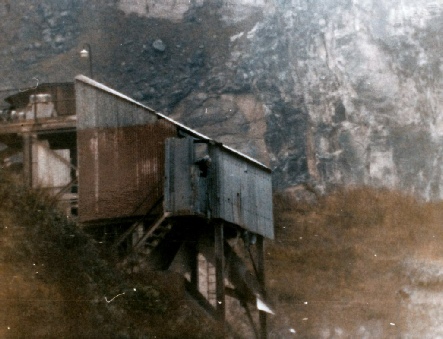 The crusher, photographed by Kevin Evans while it was still in use - 1960 or 70s. Some of the 7-inch rock it produced was fed to the Granulator.

The Granulator - this reduced the stone further, to chippings and dust, which were sent by a conveyor belt to ‘the bins’. Dewi Jones can just about be seen in a window on the right. Another photo by Kevin Evans. 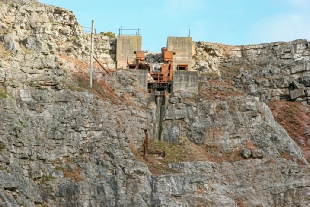 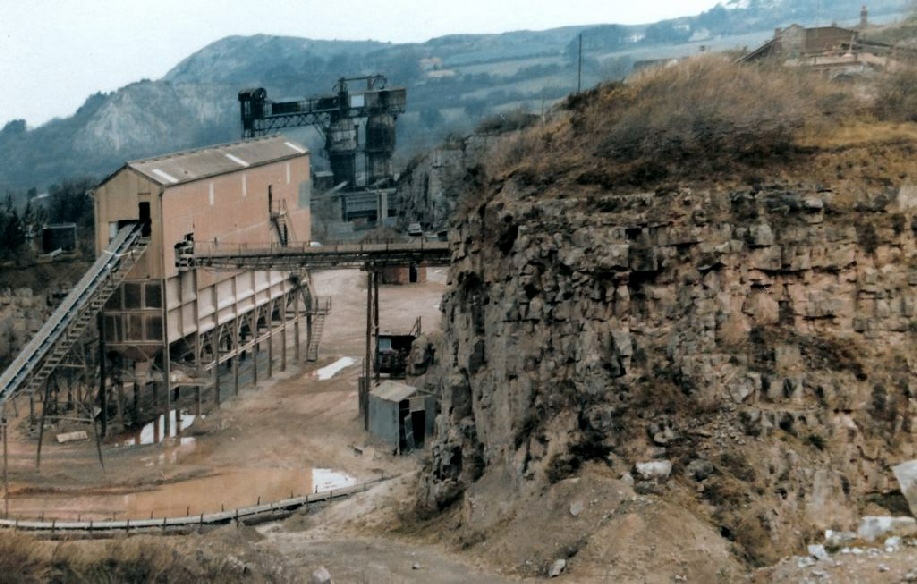 The huge building - long gone - was known as ‘the bins’.
The stone chippings and dust went across on a conveyor belt, to be loaded in to lorries.
The kilns can be seen in the background. 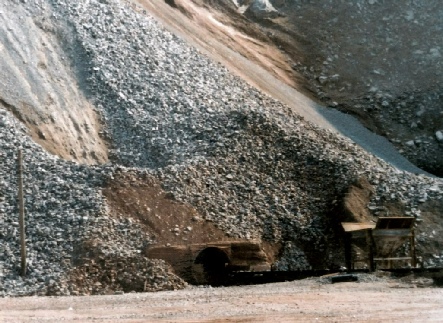 Some of the 7-inch output from the crusher didn’t go through the granulator. It was loaded on to a small train that ran over the road to the lime kilns on the other side of the Trelawnyd Road.

Kevin Evans worked on the weighbridge, these are more of his photos. 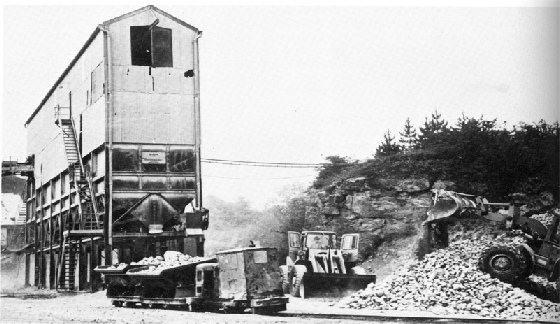 A photo from around 1973 shows ‘the bins’ with its hoppers for loading dust and various sized chippings into lorries for transportation to various customers.

In the foreground is the small train that carried rock over the road to the lime kilns. 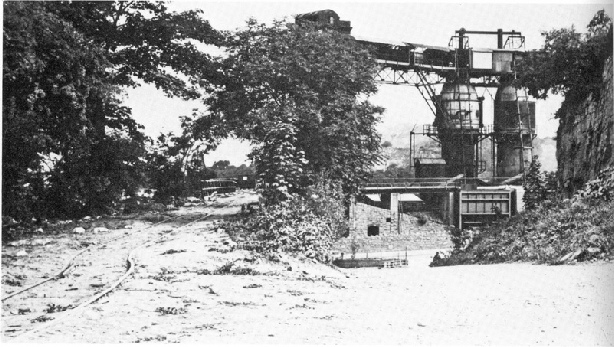 From the quarry, 1973, looking towards the lime kilns on the other side of the road. Trelawnyd Road is just about visible in the lower right of the picture, below the stone wall.

The kilns in the background had replaced the old stone one in the 1910 photo above. 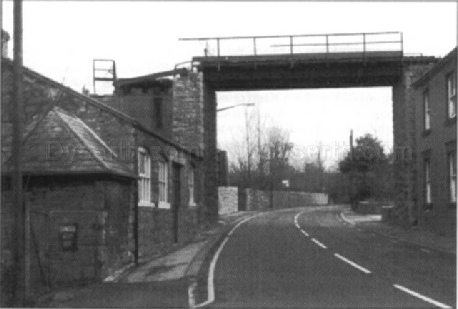 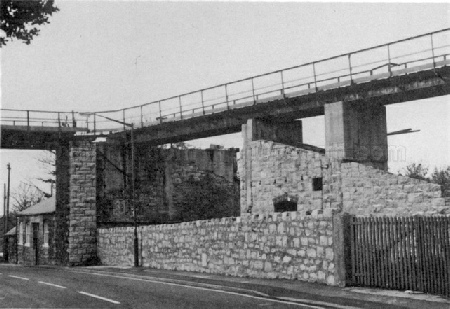 What is now the Surgery, on the left, with the bridge that carried the light railway for conveying crushed stone to the lime kiln.

From the other direction, the old quarry office (now the Surgery) can just be seen through the bridge. The bridge was demolished in the 1970s. 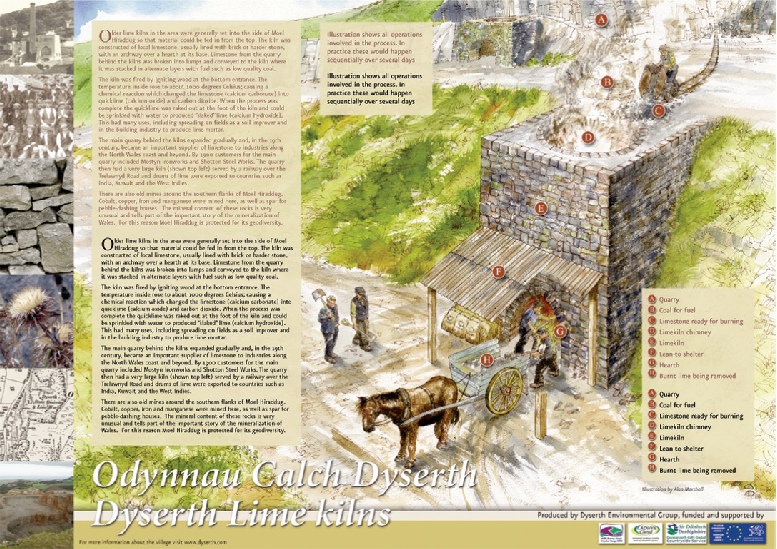 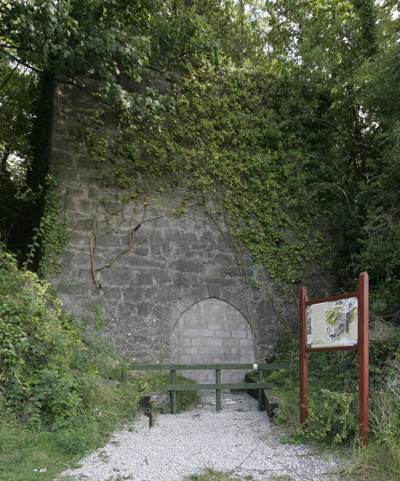 With an information panel provided by Dyserth Environmental Group.

The panel is shown below.

The Lime Kilns are now owned by Dyserth Community Council 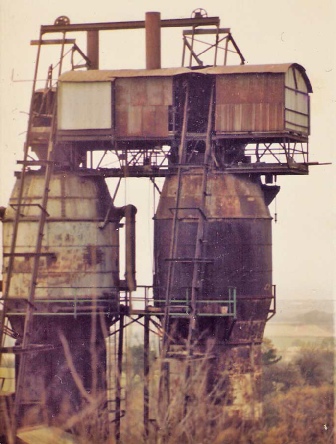 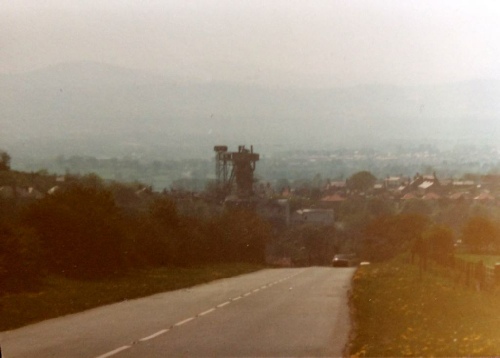 The lime kilns as they once appeared; approaching Dyserth from Trelawnyd. 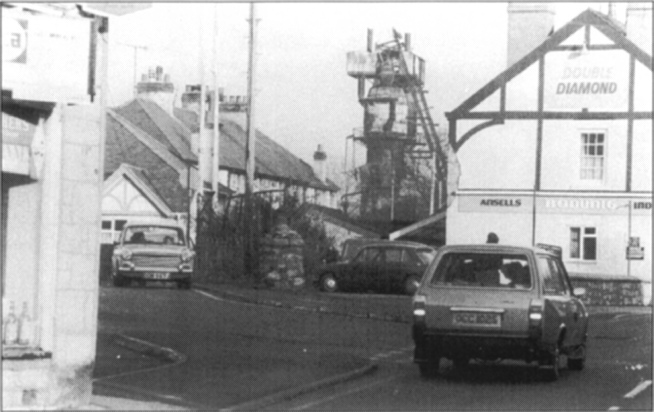 The kilns
and the Bodunig from the High Street

And a picture of the kilns, taken about 1977
not long before they were demolished. 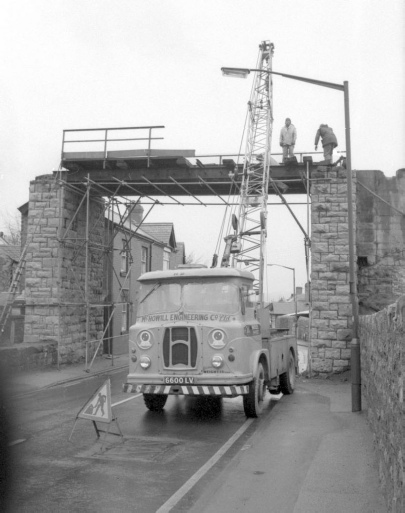 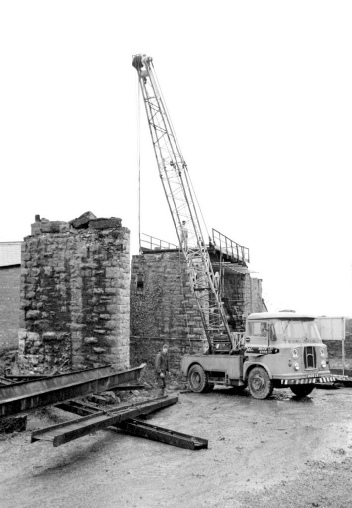 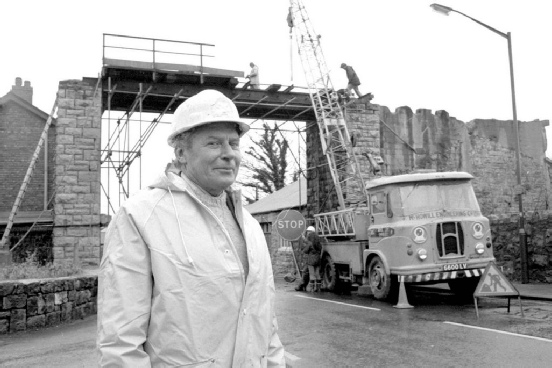 Photos from Barry Hamilton of the bridge being removed. 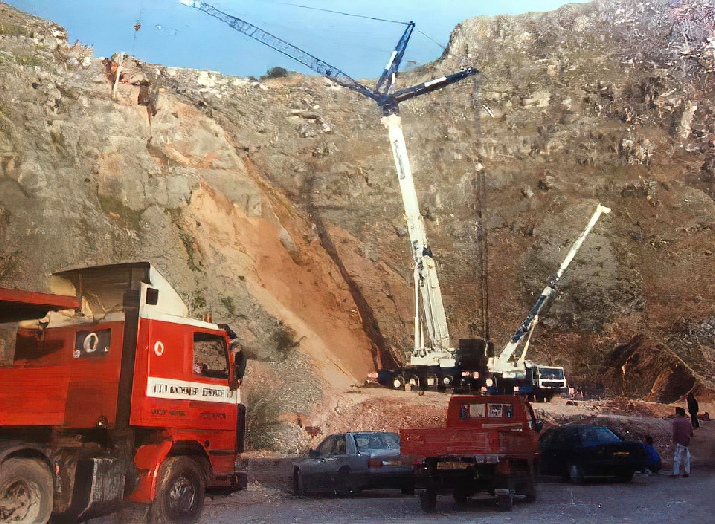 Removal of the crusher - photo from Gareth Rogers