In its original form it was a watercolour but was subsequently reprinted in black and white. The focus of interest is Graig Fawr with the red deposits which gave Talargoch its name. (coch or goch is Welsh for red).

The old mine entrance in the centre is the famous 'cave' known to generations of children as the black hole.

Beyond lies Graig Bach with the ruin of Dyserth Castle atop.

The launder passing behind the spoil in the foreground served the waterwheels which were probably the only means of keeping the mines dry below the level of the 1699 sough (drain). The industrial revolution landed in Meliden sometime between 1714 and 1736 in the shape of that alien brick building sitting as bold as brass in the bottom left corner—a Newcomen engine house.

In the black and white prints it is easily overlooked, in colour it is a revelation. If you doubt it, just look at the replica Newcomen engine at the Black Country Living Museum mentioned above and the relationship is obvious.

Locating the fire engine shaft is problematic because the contemporary plans would not seem to be particularly accurate with regards to scale. 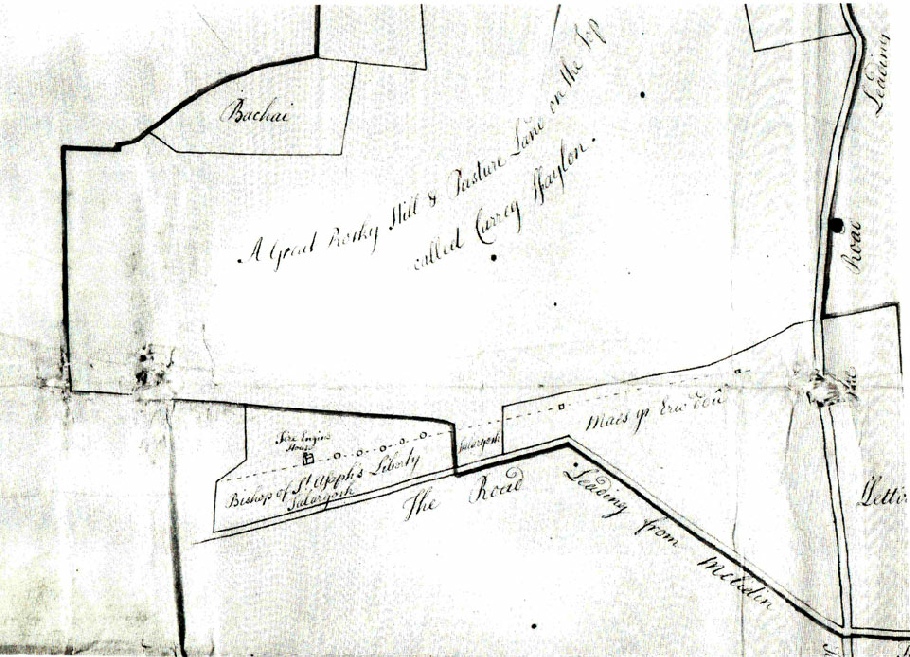 There is a 1736 plan (below) attached to the London Lead Company's lease which shows the fire engine on the Bishop of St. Asaph's Liberty. (NLW Plymouth Mss. 1586) It was still there when Pennant and Griffiths visited but may have been empty by that time.

Another plan dated 1799 has far more detail. (UCNW Mostyn 7048) It is the Map of Lands in the Parishes of Disart and Melidan in the County of Flint which colour codes the various parcels of land and names the owners. 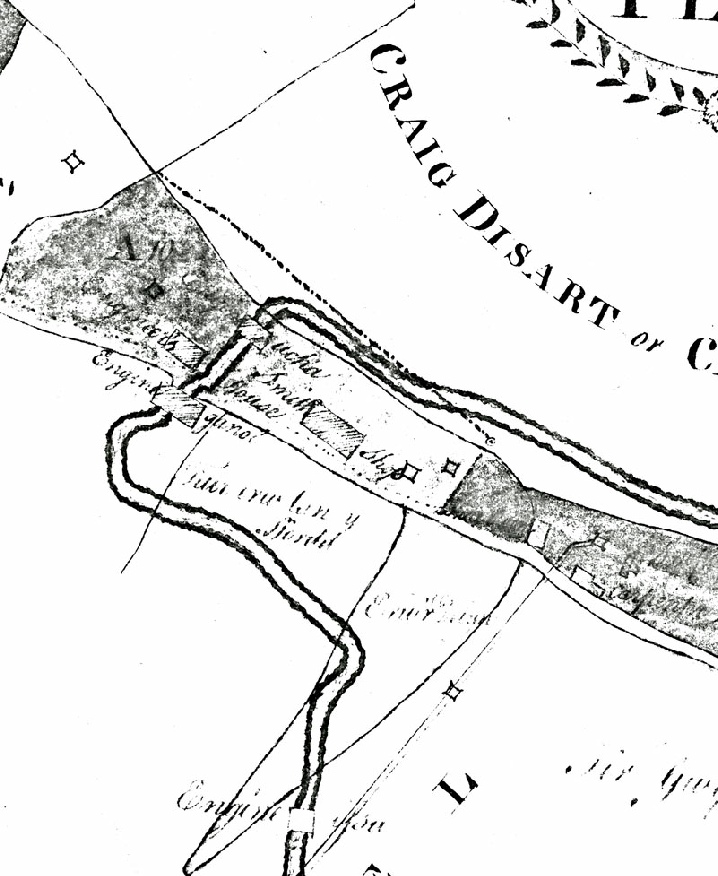 The shaded area marked A10 corresponds with the Bishop of St. Asaph's Liberty and the 1750s Panton leat provided the water for the three water wheels.

The Newcomen engine was sited somewhere here. It may have been on the engine ucha or engine ganol shaft but there is another possibility.

Just beneath the A10 inscription is another unmarked shaft. Unfortunately that shaft does not seem to exist on any of the surviving underground or surface plans from the 19th Century.

The Clive engine house has become well known because it survives. It could be argued that the Talargoch Fire Engine is of greater historical significance.

Perhaps the impending development of the area might be preceded by an electrical resistance survey. 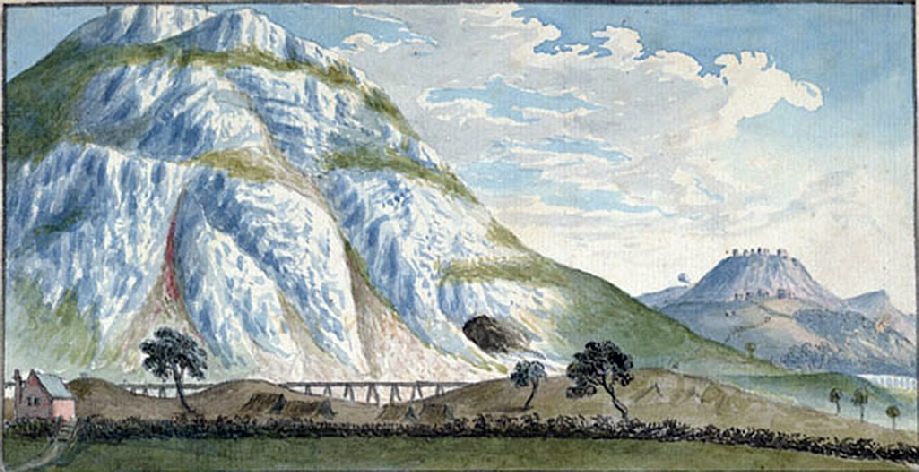 The 1660s saw an intensification of mining activity at Talargoch when the hill known as Carreg Faylon (Craig Fawr) had become the legal possession of Eubile Hughes of Llewerllyd whose family had been fending off illegal miners for some years. He granted leases to mining interests from Derbyshire, Chester and Northop. Until this time the miners had been doing nothing much more than scratching around on the surface. There were attempts to improve the waterlogged conditions encountered by driving natural drainage levels and installing pumps powered by water wheels. The problems were exacerbated by the veins having no regard for ownership, which made it very difficult to organise the drainage of the mine. The details can be followed in J. Thorburn's Talargoch Mine, (British Mining 31, Sheffield: Northern Mines Research Society.)

Deep mining became a realistic proposition in 1712 when Thomas Newcomen built the world's first successful steam mine pumping engine. The machine he erected at the Conygree Coalworks near Dudley to pump water from the collieries on Lord Dudley's estates is generally reckoned to be the first. In 1986, after more than a decade of research, the Black Country Living Museum completed a fully working replica at their site on what used to be Lord Dudley's Conygree Park. Click here to see it.

Staffordshire, Warwickshire and Cornwall were hotbeds for the development of early steam atmospheric mining pumps. The engineers from those areas started to use their technical abilities to exploit difficult mines which were rich in ores yet previously considered too wet to be worked profitably. This happened at the Woods Coal Mine at Ewloe some time between April 1714 and December 1715 when William Probert of Hanmer and Richard and Thomas Beech of Meaford installed a Newcomen engine. It was a successful venture and they looked for similar opportunities.

In August 1714, a partnership which included Probert and Beech leased the Bishop of St. Asaph's land at Talargoch. By 1736 we know that the Talargoch “Fire Engine” had been built because it appears on a map attached to the lease taken out by the London Lead Company in that year. The lease explains that the engine used the Welsh Copper Company’s sough of 1699 as the drain. The sough can still be seen at the bottom of Tir Gwynt, which is the field adjacent to Ffordd Ty Newydd. 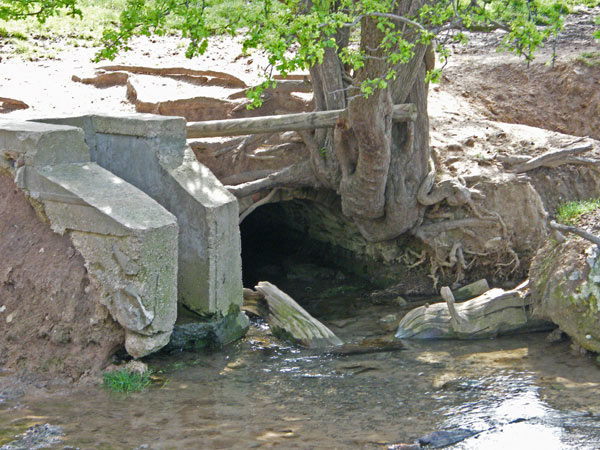 The little brick lined adit still serves as the natural overflow for the water from the mine before it makes its way through Roundwood, Llys and into the Prestatyn Cut.

The actual date of the Talargoch Newcomen engine is open to conjecture.

 The Staffordshire Gentlemen needed to pump Talargoch as soon as possible if they wanted to get to the veins below the water table.

 They were installing a “Fire Engine” in Woods Coal Mine, Ewloe in that same year and must have been in contact with the suppliers of boilers, cylinders and all the other parts they needed.

 By 1717 they had also built one at a lead mine at Yatestoop in Derbyshire.

 Between 1724 and 1727, Richard Beech had been buying engine parts from Coalbrookdale and they were dispatched to him at Hawarden so he was building an engine somewhere. No other local mine is known to have had an engine at this time.

Location of the Fire Engine

The 1781 colour print of Talargoch and Dyserth Castle in Pennant's The Journey to Snowdon is a gem.