A De Havilland Giant Moth, possibly G-AAEV
(can’t quite make out the last letter but it can’t be X or Y as they relate to the wrong kind of aircraft)

The plane crashed at Aberkinsey Farm, Dyserth and the photo belongs to Owen Rowlands, deceased, who lived at the farm on the dual carriageway - Rowlands the milk. It’s thought that he is one of the boys in the photograph.

In 1929 Rhyl held a Carnival which turned out to be one of the biggest events ever to be held in the town.  Ten of thousands of people flocked into Rhyl by road and rail for the three day Carnival which began on Thursday, June 27th.

The sun shone on the Carnival’s opening day, the highlight of which was the arrival of the famous aviator Sir Alan Cobham, in his de Havilland Giant Moth which he christened “Youth of Britain”

The Rhyl Journal reported that he was expected to arrive at Aberkinsey Farm (between Rhyl and Dyserth) at 11a.m and a big crowd had gathered to welcome him.  Unfortunately he experienced mechanical problems as he left Crewe which meant it was after 12 noon that he was first sighted over the farm.  He made a “beautiful” landing amidst great cheering and was immediately “mobbed” by the crowd.  Sir Alan then proceeded to take members and officials of Rhyl council for a flight over the town.  Then a second party boarded the plane but as it took off the propeller caught a tree and sustained damage which caused abandonment of the flight.  Fortunately no-one suffered any injuries.

The Rhyl Journal published a list of children chosen to take a flight that day, representing various schools in Rhyl.  It added that their flight would be postponed until the following day because of the accident.  It was not clear in the paper as to whether the children ever took their flight – risk assessment was probably quite different in 1929!

In the Rhyl Journal the following week, under the headline “Aerodrome for Rhyl” Sir Alan assured those gathered at a reception that there would have been no such trouble if there had been a proper aerodrome.  Sir Alan said “they had to make use of improvised fields as they proceeded from town to town and the field selected at Aberkinsey Farm was the only one suitable for the purpose of such a demonstration from Anglesey to Rhyl.  There was a great opportunity before Rhyl, so far as aviation in North Wales was concerned, and he hoped they were that day seeing the beginning of the laying of the foundations of a local aerodrome.”

Above is G-AAEV. This might or might not be the aircraft involved in the incident above. But according to Wikipedia and other sources this aircraft (named Youth of Britain) was used by Alan Cobham in an aviation promotional tour of the United Kingdom from May to October in 1929.

Another source says the tour was a campaign to convince local authorities of the need for municipal airports.

The Giant Moth had a passenger cabin with 8 seats and the pilot was in an open cockpit behind the wings. It was 39 ft long with a wingspan of 52 feet.

Other sources say this aircraft crashed and was written off at Broken Hill in what is now Zambia in 1930. 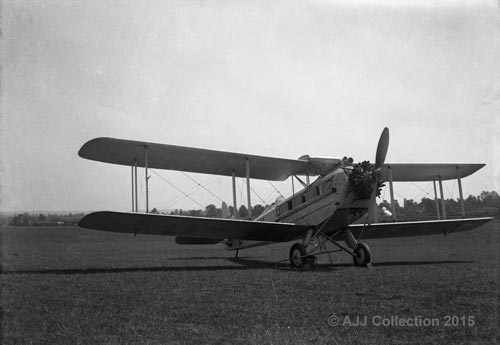 Image supplied by the A. J. Jackson collection at Brooklands Museum www.ajjcollection.co.uk